Nadeem Shwayri, a man of peace in crises:
Crossing through Man and his “Potentials” in the span of 65 years

Here is its full translation. 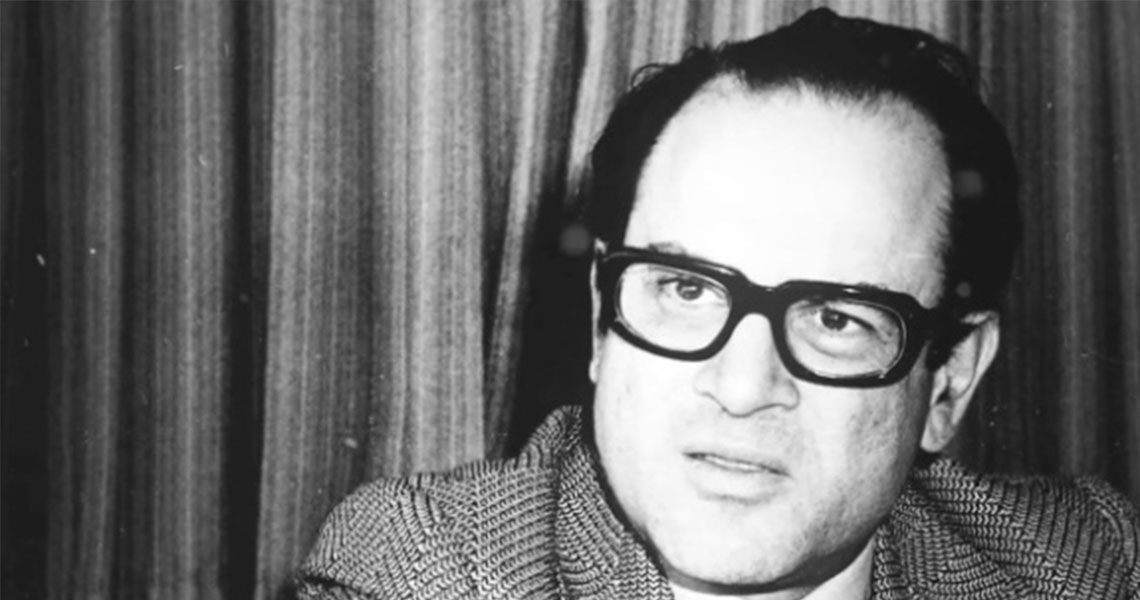 In the current dark times that Lebanon is undergoing, both Lebanese residents and expats, especially the youth among them need to dive into a success story that was not without pain and despair -- the success story of one man, Nadeem Shwayri, a role model and founder of Al-Kafaàt who in 1957, devoted his life to serve Man in all of Lebanon.

Last week, the professor of journalism Georges Ghanem singled out the history of Al-Kafaàt and its founder in a two-episode documentary directed by Mark Boustany, and that was broadcast last week on the LBCI network. This coincided with Nadeem’s birthday on January 25, and in commemoration of the 50th anniversary of the official opening of the first Pilot Rehabilitation Center in Lebanon and which bore the name of Nadeem’s wife Mrs. Lily Shwayri, on January 23, 1972, under the patronage of then Prime Minister Saeb Salam. 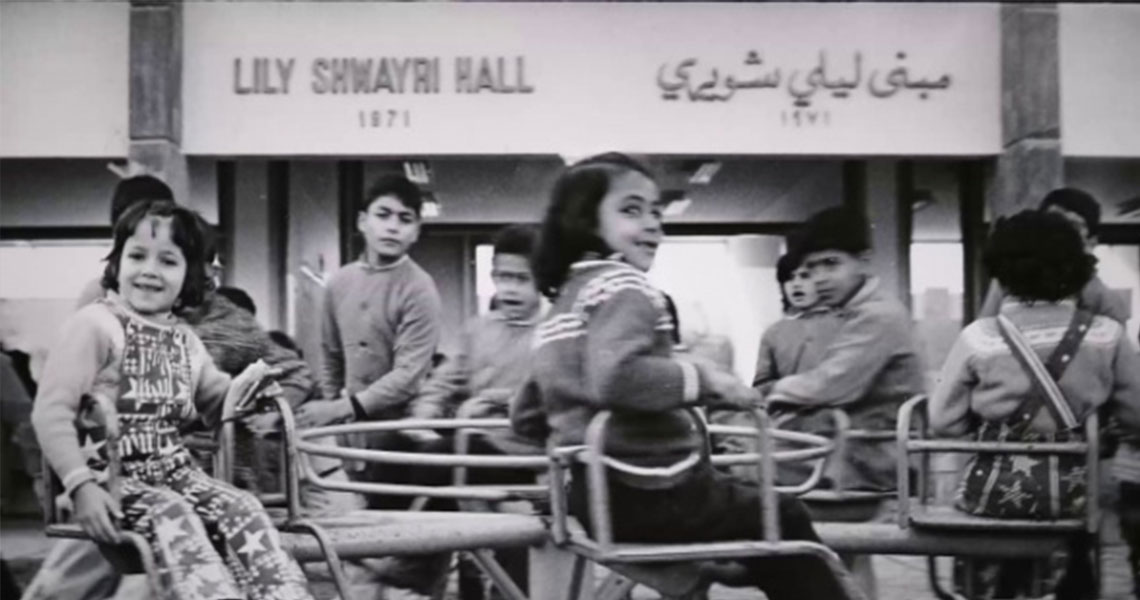 Why should we dive into the world of Nadeem Shwayri?

The answer is simple: because it is a lesson to those who have been worn out by the current crisis. This is clear in the coffee-table book "We are all handicapped" which includes selections from the two original books on the meanings of the foundation and its history and which were published by the founder Nadeem Shwayri in 1982 (Book One) and in 2007 (Book Two). These books reveal to the reader Nadeem’s important principles for he never compromised, nor did he ever give up serving Man within a dignified lifetime project dedicated to people with special needs through education, employment and social integration, through Al-Kafaàt which buildings were painfully destroyed during the Lebanese war and occupied 15 times by the de facto forces at the time.

Annahar tried in an interview with a member of the Foundation's Board of Trustees, Myriam Shwayri, the youngest daughter of Nadeem Shwayri, to draw a road map for this role model who proved that Man is all Potential and not a disability, and pragmatically translated this belief by radically changing the then-understood concept of rehabilitation by transitioning it from an understanding of charity and shelter to constructive rehabilitation through education and production, that is to say, work. 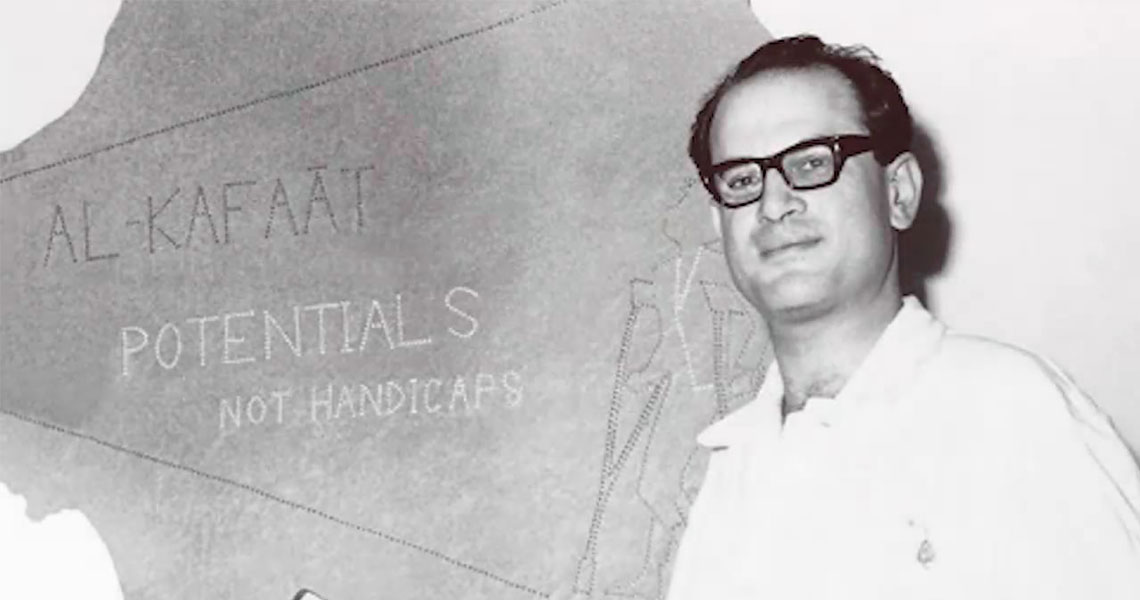 In the workshop at Karm El Zeytoun

Shwayri enumerated the reasons that prompted Nadeem who originally comes from a wealthy family and holds an MBA from the American University of Beirut, to engage in this noble humanitarian mission, highlighting that "he lived during that famous golden age of thought and culture that was known in Lebanon and the world, and built then close friendships with the likes of Joseph and Laure Moghaizel, with Michel Asmar founder of the Cénacle Libanais, and the genius poet Said Akl, and the disappeared Imam Musa Al-Sadr, and the “red” Archbishop Gregoire Haddad,... coupled with his strong interest in the philosophy of existentialism which he acquired from the thinker René Habachi who had advocated for a commitment in strong faith, and was deeply influenced by the work of Cardinal Roncalli who became Pope John XXIII and convened the Second Vatican Council, noting that both Abbé Pierre and Dr. Albert Schweitzer had their strong influence on him, especially through their involvement in social work.” 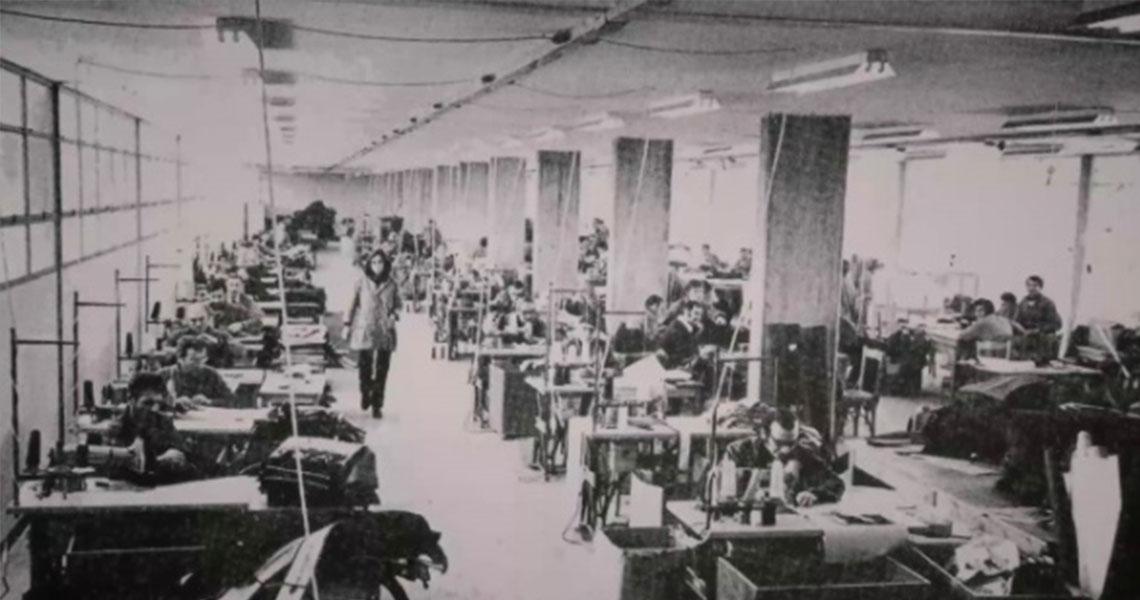 Shwayri did not forget mentioning the impact of the “environment at the American University, especially the role of Sheikh Saeed Hamadeh who supervised Nadeem’s Master’s thesis at the university. Nadeem had Hamadeh’s ear when he discussed his project which he launched between 1955 and 1956 to rehabilitate girls who were at the risk of falling into the “vicious circle” by delivering them with education. 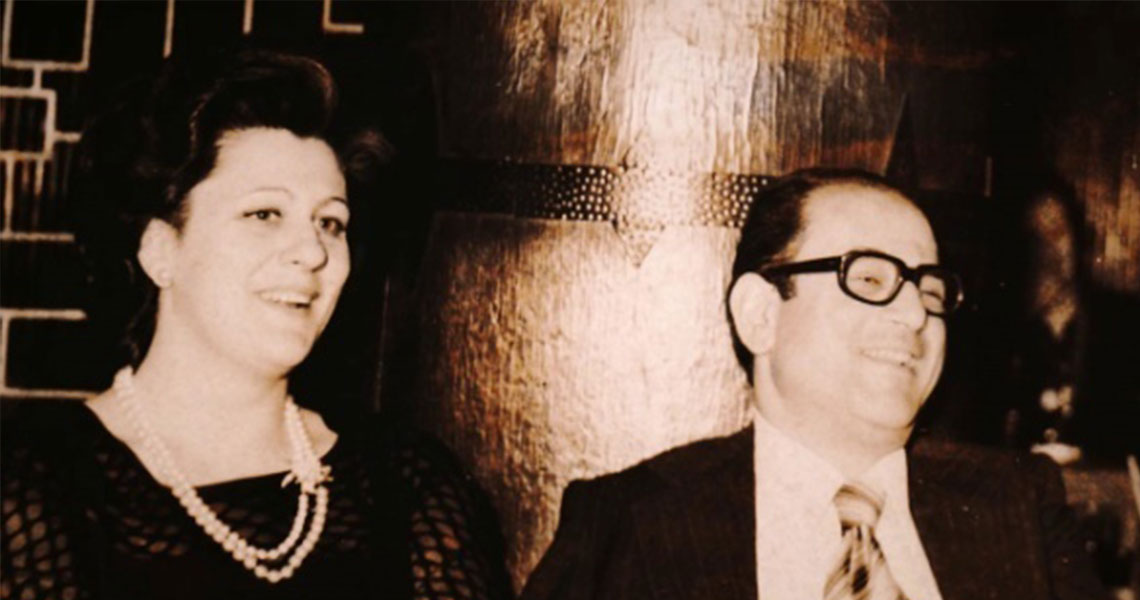 In the life of Nadeem Shwayri, there existed his "guardian angel", his companion Mrs. Lily Shwayri. Myriam Shwayri told Annahar "that the love story of Nadeem and Lily is a major reason for the success of Al-Kafaàt despite the incredible difficulties faced by the institution, along with Nadeem’s deep faith in the Unity of Man...”

Shwayri confirmed that "Mrs. Lily believed in the Mission, was loyal to it, and worked continually to have her four children, Roula, Raif, Ramzi and Myriam build relationships with their dear companions at Al-Kafaàt" noting that "Nadeem took the initiative to embody his love for his wife by naming the very first Pilot Rehabilitation Center in 1971 "The Lily Shwayri Rehabilitation Center".

It is clear, according to her, that "the two united in the Mission of Al-Kafaàt ", in that 5 locations of the foundation out of the 7 on which all 14 centers of the institution are built originally belonged to the personal heritage of both Nadeem and Lily, while Lily donated from her own personal inheritance the lands where a branch of Al-Kafaàt in Mansourieh (the Catering School) is located today”

Shwayri’s achievements were highlighted in the book "We Are All Handicapped", and the first of his accomplishments was the enrollment of girls in the hospitality sector and the graduation of the first batch took place between 1961 and 1962. The graduates went on to work in the Phoenicia Hotel, Café du Barry, Starco Restaurant, Lamp House, Le Point and Al Bustan Hotel. After that, Nadeem began employing people with handicaps in 1963, then established a workshop for the production of prosthetics and orthotics in 1965, the first all-inclusive school in 1969, then an all-inclusive vocational training and and technical education in 1972, leading to organizing the very first training courses for the manufacture of prosthetics and orthotics in the Arab world and Lebanon in 1973 and a second round followed in 1980. 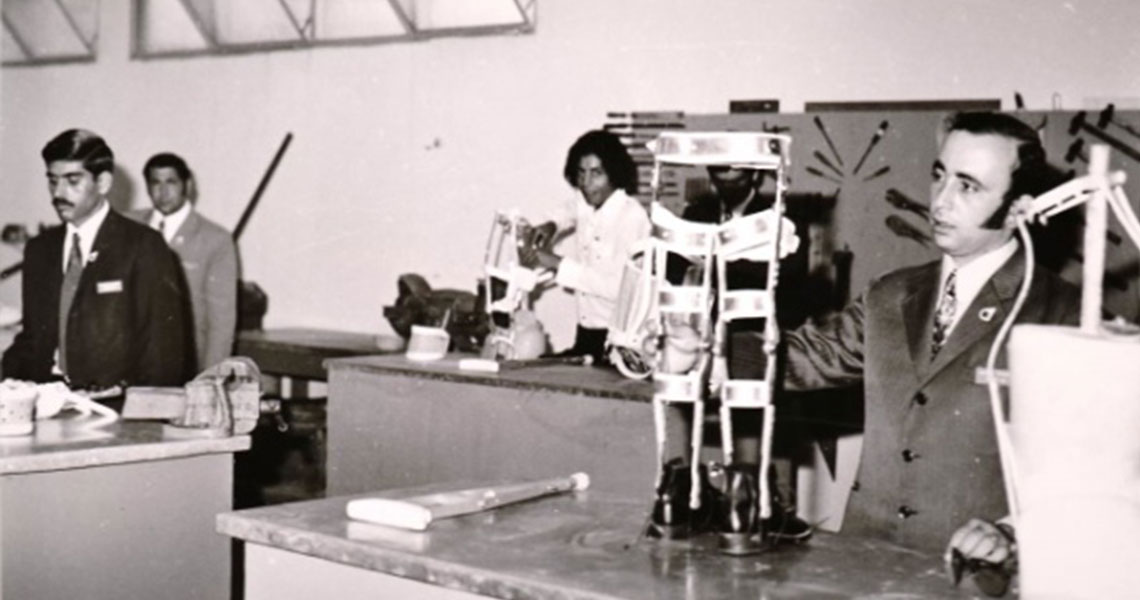 First training sessions in the production of prosthetics and orthotics in Lebanon and the Arab World.

What has changed from yesterday to today?

Myriam Shwayri answered Annahar that nothing has, but added that "the Ministry of Social Affairs is late in paying its due subsidies in addition to the fact that it has not upgraded its budget study of daily since 2011," noting that "the government has still not implemented until this day the law relating to people with special needs 2000/220 just as it has not yet ratified the International Convention on the Rights of Persons with Disabilities in 2007, all this while the government is still floundering with adopting a policy to include children with disabilities in public schools...".

She stated that "the family of Al-Kafaàt today includes 3,000 individuals, 1,000 of whom are benefit from the rehabilitation services of the Foundation free of charge, while 2,000 are distributed on the general education school, the catering school, the technical institute and the semi-free private university (founded in 1999), which is committed to delivering education against symbolic tuition fees" and she adds: "We apply inclusion in all our facilities through our keenness to equip all our educational buildings in order to facilitate the provision of education to everyone with special needs, and this is also available in all our vocational education workshops and in our industrial buildings...". 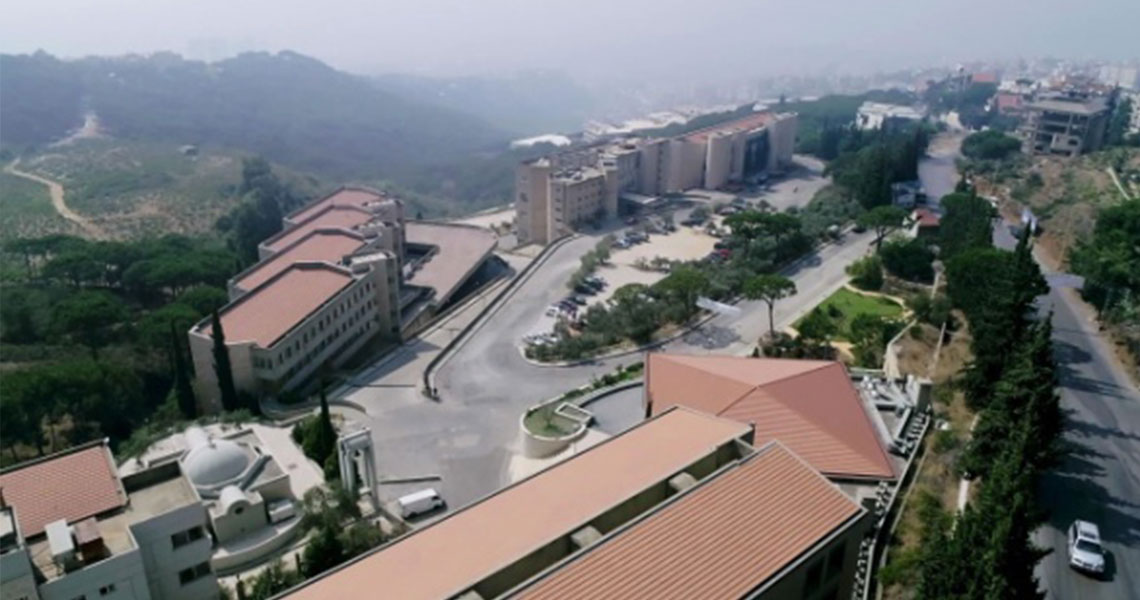 Shwayri concluded by saying, "we seek external support, as was the case in the past to secure the people in our care, yet we are fully aware that the government is our main partner and we are behind it fully anticipating its revival, while we remain deeply committed to our Foundation and to Lebanon firmly believing that both will prevail with the intercession of “Our Lady of Al-Kafaàt.”